jewelry (or jewellery), RANTS, semantics, THIS IS NOT WHAT I'M TALKING ABOUT
2 Comments

( WHAT CONTEMPORARY JEWELRY IS NOT )

Today I saw your A Cut Above Jewelry feature (from the Dec. 9 issue) laying on the table and decided to give you a read. I must say, you’re soooo confusing! I just can’t figure out why you’re using terms like, contemporary jewelry, or, conceptual and expressive, alongside luxury goods encrusted with diamonds and ridiculous gemstones that no one can afford from labels such as Graff. Is it that you accidentally misplaced the caption, “Straddling the frontier between craft and art, contemporary jewelry is not always pretty. Conceptual and expressive, its meaning may count more”? Or is it just a misguided opinion that you think this kind of stuff IS conceptual and expressive, you know, stuff that is absurdly expensive or can rarely even see in person/get any hands on? Do you think this stuff is conceptual and expressive just because it isn’t exactly normal jewelry or even young? Don’t you know there are things in this world that are really actually what you describe in that caption? I mean, you’re a newspaper, right? Aren’t you supposed to be more accurate? Wouldn’t you think you’d be more interested in things that touch on real topics, perhaps highlighting jewelry that actually is conceptual and expressive, birthed from meaningful ideas and more accessible to the average person? You know, stuff that isn’t just a crazy fantasy off limits to most your readers? Or actually just a product in the end? After all, it says in Suzy Menkes’ article, Graff has over 40 stores all over the world.

And then we have Nazzanin Lankarani’s piece featuring Cindy Chao’s work that you describe like so: “shaped by a sculptor, jewelry as an art piece,” with all this talk about the labor of a sculptor before Koons which was dependent on that artist using their own hands doing all the work from start to finish, and how Chao does that, as if it’s something unique to her, you know, a new revival of sorts. But it’s just not true! Again, that thing about accuracy. Am I to assume, International New York Times, that you think these kinds of “artists” in jewelry are few and far between? It seems to me like y’all decided to feature Chao because it’s neat she’s a one-man-band and all, and her work perfectly lines up with your bourgee aesthetic you oh-so consistently feature. But like I was saying, is this the best you can do considering this high jewelry/nature thing was maaaybbee conceptual during Art Nouveau (over 100 years ago)? But we don’t have to get into all that.  If you’re interested in featuring more compelling work, maybe even more today, while still holding on to your great need for glitz+glam, why not try to feature someone more like Philip Sajet, Karl Fritsch or Lola Brooks just to name a few? OH RIGHT you like naturey things a lot. OK ok, why not then look at Marta Mattsson or Mari Ishikawa, or check out this exhibition? Without trying to discredit Chao (as I do respect her work practices at the very least), these people I’ve mentioned are real artists and their work is part of an actual conversation, not to mention the fact that their ‘entry level’ jewelry starts at a hell of a lot less than $10,000-$100,00 like that of Chao. I’m just throwin’ out suggestions here. Can I ask another question? Other than aesthetically speaking, how is Graff or Cindy Chao really that different from the companies who paid for ads alongside these articles (Dior, Chanel, Cartier, de Beers…). At at very least this one from Bulgari below seems slightly more relevant in the sense that if I were rich I might actually consider buying that bracelet and ring set vs. a god awful heart-shaped emerald covered flower or something, but I digress… My point is that if you’re going to use this kind of language, you better get better at choosing the right work to talk about. This ain’t it. It is our language after all, particular to a field you obviously know little to nothing about (see artists I mentioned, they are a good place to start, or watch this video).

I’ll mention that this jewelry issue from December 9th isn’t completely inaccurate and out of touch, you do include the following bit about jewelry designers exhibiting their work at the Museum of London (which is great), plus a pretty good feature about Romanian designer, Carla Szabo, that talks about what she intends with her objects and local consumer culture. 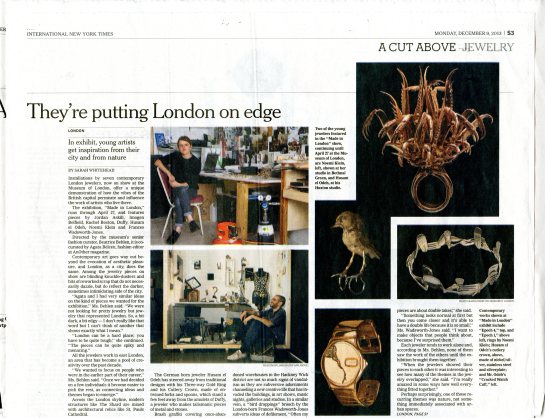 Getting warmer, but let me ask my last question; why on earth did you feel it necessary to publish this ??? : 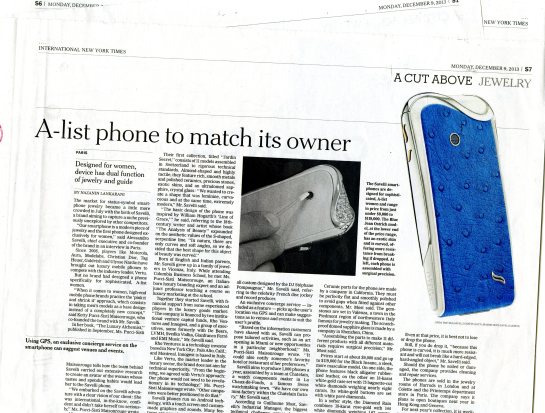 Really hideous, NYT. I won’t even start, which is difficult considering the first thing one reads is “designed for woman”…. you know what, I will take that heart-shaped emerald covered flower thing after all.

the linked video in this text is a lecture by Damian Skinner introduction AJF’s new book, Contemporary Jewelry in Perspective.